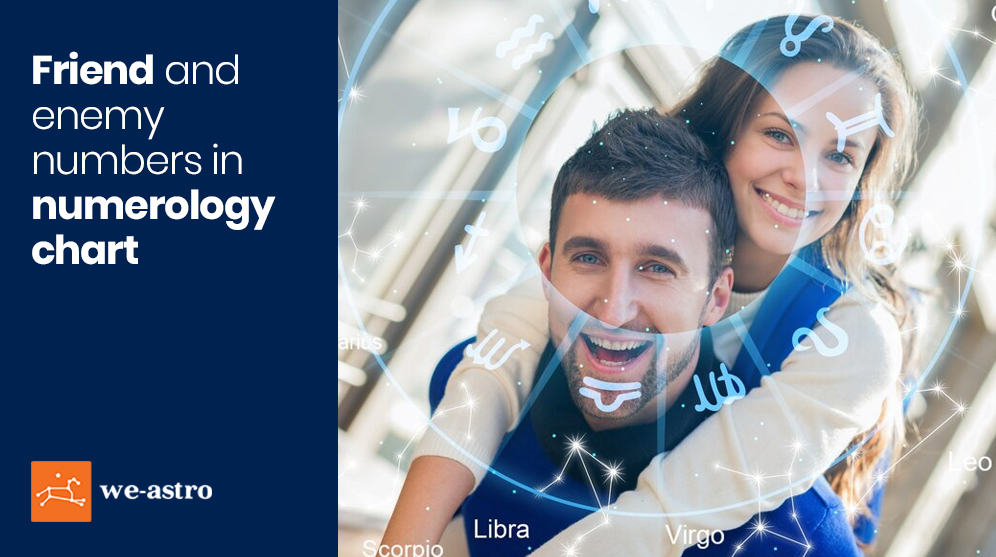 What are the Friend and Enemy Numbers in Numerology Chart?

Numbers might just be a few digits for a common person, but an astrologer would swear by its relevance any day. Numbers have a huge role to play, in our lives and in astrology. It has been proven in history that numbers have a significant role to play in astrology, hence any prediction, any chart that you will see has to do something with the numbers.

Now, every number is unique and they have certain attributes that distinguish them from the other numbers. What do numbers have to do with the meaning of your life? Well, they're everywhere. In fact, they're the most important part of any numerology chart. You probably already know that numbers are used to represent people and things. For example, some people see 3 as a lucky number because it represents the Trinity: Father, Son and Holy Spirit. Others see it as an unlucky number because it represents death in Germanic mythology.

But what about other numbers? What does 6 mean? What about your enemy number? And which numbers are considered friendly?

Well, there's no one single answer to these questions. But in this article, we'll try to shed some light on these complex concepts by explaining how numbers work in numerology.

Types of numbers in numerology.

There are two types of numbers in numerology: friend and enemy numbers.

Friend numbers are the numbers that represent the positive traits of someone. For example, if you have a friend named Lucy who loves to cook, then her number would be 3. That's because 3 is a number of love, friendship, and creativity.

Enemy numbers are the numbers that represent negative traits. For example, if you had an enemy named Saul who was always late to your class, his number would be 6 because 6 is a number of death, destruction, and financial ruin.

The significance of these numbers is that they help us see our own potential and what we can achieve through the lessons we learn from others. They also give us insight into other people's lives so we can better understand them—and vice versa!

Numerology is a form of divination that uses numbers to look into your future. You can find out your own numerology number here.

Friend and enemy numbers are also referred to as Mother and Father Numbers because they represent mother figures and father figures in your life; they also correspond with positive or negative qualities that you may have encountered during your lifetime: love/hate relationships with people who are either too

How to determine your friend and enemy numbers?

Numerology has long been a tool used by astrologers and fortune-tellers to provide insights into a person's personality and future. But what about numbers? What do they mean when you're looking at the numbers of another person?

Well, if you're looking at the numerology chart of your friend or enemy, you probably know how to read it.

Another important thing is to look at their month of birth and check for any aspects associated with those months (for example: Mars in Taurus for your enemy or Venus in Virgo for your friend). This tells us about how their personality is affected by these aspects—it might

What do each number represent?

Now, we will finally learn which planet each number represents?

The friendliness of the number varies for each person, which depends on a lot of factors, like his name, surname, birth date, birth time, zodiac sign, etc.

Hope this article was helpful. Stay tuned for more such astrological content.