Rahu in 4th House and Ketu in 10th House 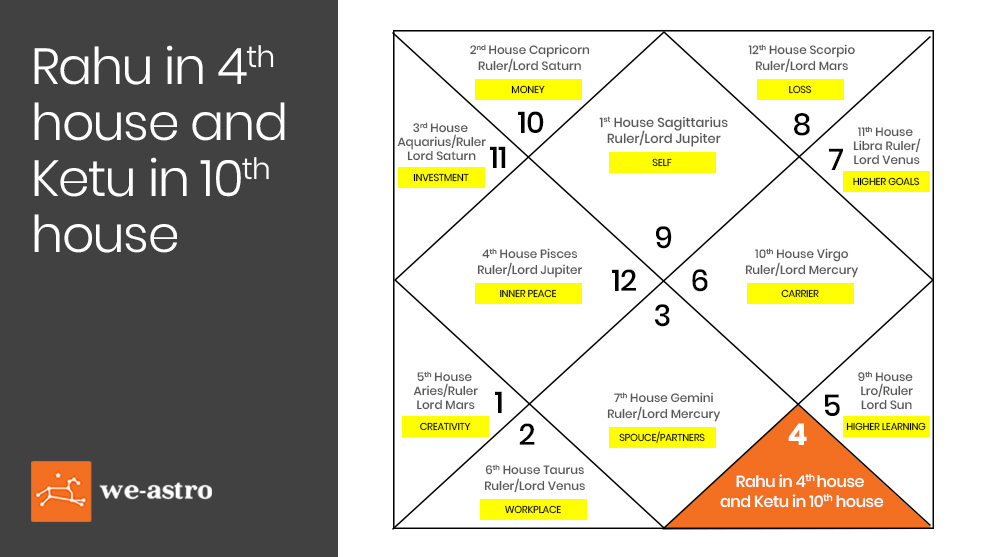 In Vedic astrology, the Rahu and the Ketu play an important role in a person’s chart. They are basically seen as malefic planets but they also play a significant role in the growth of a person. They will have a deep impact on a person’s chart as well as their personality and perception of life. It is a given that they will either have drastic results in a person’s life, either malicious or beneficial.

The Rahu and the Ketu in the houses

Now there are twelve houses in a person’s chart. When one has Rahu in their 4th house and Ketu in their 10th house, there will be many things that should be considered without any further ado. We should keep in mind that both of them have the potential to hurt a person both from the inside and outside.

The effect of Rahu and Ketu

There will be a hindrance in both of them. A person will be facing great problems in both. There is little known how to put the danger at bay when these two are involved. There will be constant problems in a person’s life domestically as well as professionally. The natives will rarely have any mental peace and will always be in a state of unrest.

There’s a high chance that they might get depressed and have chronic anxiety. The native will have a twisted mindset because of this combination. They will get what they want, no matter how badly the process affects them. They will have no peace in their marital life as they will always be at each other’s throats. They will suffer from health issues quite frequently and they will have a higher chance of facing a heart attack than the others.

They will face drawbacks, and failures and might even face betrayal from a loved one. This is all because of the malefic of these two planets. Though the malicious effects are endless, there are a few things that are quite benevolent that they might take a prt in. They will be the reason an individual might get a chance to travel abroad without any problems.

They will also be able to settle complex matters with ease and less complexity. The mother of the native of such a combination will have a very deep connection with their mother. Their bond with their mothers will be special today at the least. They will keep the world on one side and the rest on the other. They can go to their limits for their mother.

They regard their mothers as their gods. The natives of their particular combination are extremely intelligent in nature. They don’t get faxed very often. May it be all the challenges they had to conquer or the things that they lost, they are the fighters and the survivors. They will work hard and sharpen their brains on the way while solving impossible situations with ease.

They are quite strong in their resolve and they will use their brains to get what they want without any hesitation. The next effect is their attainment of fame. They will be famous. They will not be just normal famous but famous on a different level. They will gain immense fame and might even get lost in the glittering world of it. All of it depends on their resolve.

Rahu in 4th house and Ketu in 10th house - Conclusion

All in all this combination of planets needs extra attention with delicate care. It can either take you to the moon or throw you down a mountain.