What are the emotional triggers of each zodiac? 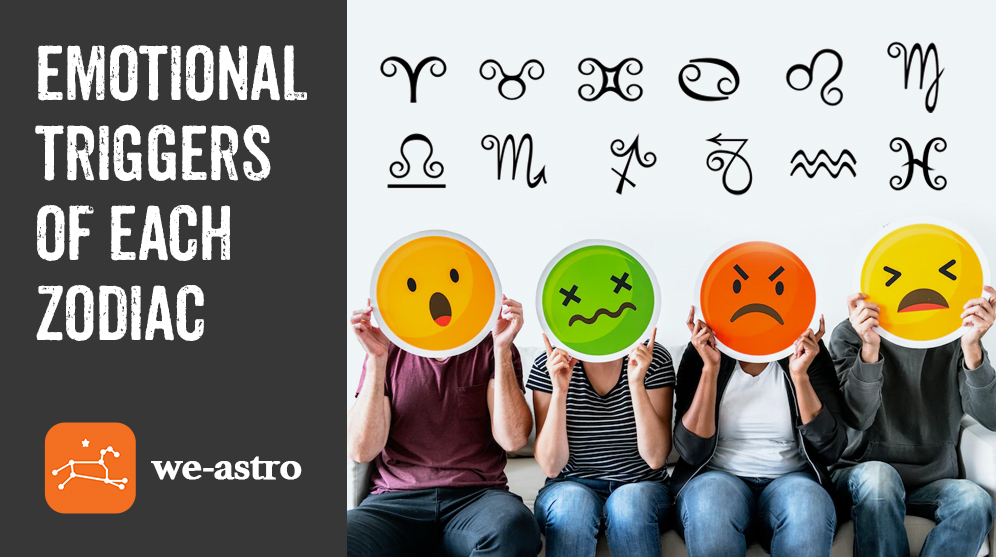 What is Zodiac’s Biggest emotional trigger

What is an emotional trigger?

An emotional trigger is something that we all have. It is different for different people yet there is one thing common about it. It changes the attitude, behaviour of a person 180 degrees and in a negative way. In simple words, it triggers people. It is something that should not be pulled off.

How do the zodiacs influence it?

Every zodiac, have their way of self-expression and character. To an extent, all of them are the same. They have different emotional triggers but when they get triggered, it is not such a pretty sight-

What are the emotional triggers of each zodiac?

The above table shows the zodiac signs and their emotional trigger

They love everything and are quite tired but something that ticks them off is lack of productivity. They enjoy vitality more than anything. Thus it is better to be productive around them because they generally like that and get triggered in the face of sloth and callousness.

What are Taurus triggers?

If we were to describe them in one word, that would be stubborn. Their stubbornness knows no bound. They have only one trigger and that is defeat. They do not like being defeated. They get triggered instead of accepting their defeat. It is their only negative trait. Stubbornness has always been their undoing and defeated their trigger.

What are Gemini triggers?

They like it expensive. They love it when they try out something new and go to new places and explore stuff. Thus their only trigger is a monotonous lifestyle with a tedious 9-5 job. They just don’t like to be the average joe and it can trigger them to flip out. They may leave that job to go on a long vacation without even thinking much.

What are Cancer triggers?

What are Leo's triggers?

They love attention and love. They love being loved. Leo people do not like it when they are not given attention. It rocks them off. The lack of attention is their emotional trigger and they make sure that everyone understands that. In a way, they are right and wrong at the same time.

What are Virgo triggers?

They are sensitive people. Rude and loud people tick them off. They are not into loud and rude tones. It can change them in an instant. It is their trigger. So it is better not to do it in front of them. Virgos are very respectful and they intend to be respectful to others.

What are Libra triggers?

They are usually emotionally detached and exceptionally diplomatic. They normally don’t get triggered unless they see injustice. They will get triggered, to say the least. They will be made and will be difficult for the person who committed the injustice. So be sure to keep the Harmony around them.

What are Scorpio triggers?

What are Sagittarius triggers?

Sagittarius doesn’t like to be in one place, stuck without no growth, they prefer growth and spontaneity. Thus it is not easy for them to be stuck in one place. Thus it is this that you must mind. Don’t put them in a box. They will get ticked off.

What are Capricorn triggers?

The fear is their biggest trigger. The way they are, they always want to go beyond their boundaries and it is just what it is. They will get triggered if they see fear in anybody. That’s it.

You may also like to read: your annoying habits as per your zodiac signs

What are Aquarius triggers?

What are Pisces triggers?

Pisces are creative and dreamy. At times they do eccentric things but know what? They get triggered someone scolds them or points out their mistakes. They just want to live their lives and nothing else matters to them. So this is their trigger.

Do you have any questions regarding your zodiac sign, contact our best online astrologer and get the best advice.