What are the rituals in Karwa Chauth? Know everything related to it. 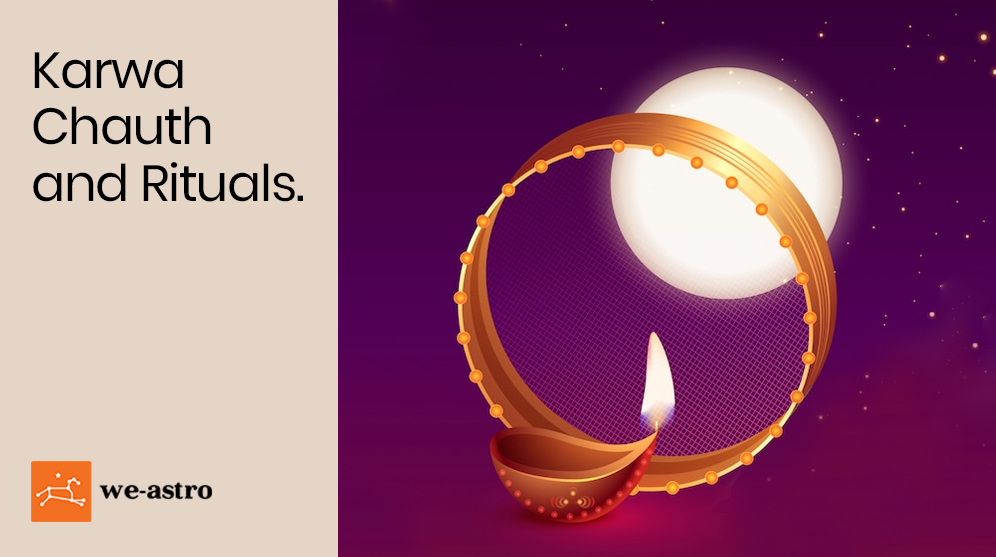 What are the rituals in Karwa Chauth? Know everything related to it.

Karwa Chauth is an auspicious day, when the wives keep a fast or vrat, praying for the long life of their husband. Nowadays, even the husbands keep this vrat for their wives, which is extremely adorable and it only makes sense.

Karwa Chauth falls on the fourth day of Kartik month, every year. It is observed on the Krishna Paksha Chaturthi. Karwa Chauth has been a day of great significance for ages now. The married women fast for the whole day, and they break their fast when the moon appears in the night sky. They offer water to the moon, which is known as Argha.

The wives break their fast with the first sip of water from their husbands, and then they eat sweets and other food items. Karwa Chauth is also popularly known as Karak Chaturthi.

Why is Karwa Chauth important?

Many people believe that the concept of Karwa Chauth is outdated, but in reality, it is not so. Karwa Chauth signifies the bond between a couple and it strengthens their relationship. They say, there is no greater power than love and Karwa Chauth is the day which celebrates love. It is completely okay to have one’s own opinions, but Karwa Chauth is a festival that celebrates the love between couples, and nothing is more beautiful than keeping your spouse in your prayers.

There is an elaborate set of rituals that the women have to follow, and nowadays the men keep this fast, praying for the long life of their wives. It is believed that observing the vrat of Karwa Chauth brings happiness and prosperity to the couple’s lives.

The tales related to Karwa Chauth

There are many anecdotes related to Karwa Chauth, and this one is by far the most famous one. So, the tale starts with a princess named Veervati, who had seven brothers. She was the wife of a very powerful king. After her marriage, Veervati went to her father’s palace to observe her first Karwa Chauth, only to have hunger pangs later during that day. Her brothers loved her very much, and they couldn’t tolerate her pain. They thought of a plan so that Verrvati could finally eat and break the fast.

So, the brothers created an illusion of the moon by keeping a mirror in the peepal tree. Veervati mistook the mirror for the moon and broke her fast. As soon as she did that, she got the news that her husband had passed away. She ran back to the kingdom, where she found Lord Shiva and Goddess Parvati, who informed her that her husband had died because there was a mishap in her fast and that her brothers are to be held responsible for the whole thing. She begged for forgiveness, and they told her that her husband will be fine if she did the rituals of Karwa Chauth properly, but he will be sick for some time.

She rushed to the king’s room to find him in a coma, with several needles pierced into his body. She took all the needles out, except for one. It took her a year to take out all the needles. While she was completing her rituals, the maid took out the last needle and the king misunderstood her for the Queen.

After this, the Queen went back to her kingdom, where she found that the King was fine and that he had forgotten her and misunderstood the maid to be the Queen. A few months later, the King visited that kingdom and found Veervati. He was impressed by her beauty and asked her what she needed. She asked for two similar dolls and sang a song about how the maid became the Queen and the Queen became an outcast. After this, the King remembered her and she told the whole story to him. This led to their union.

Now, there is another story of Savitri and Mahabharata. In both, stories, the females Savitri and Draupadi are able to save the lives of their husbands by doing the Vrat of Karwa Chauth and being faithful to their husbands.

So, these are the tales related to Karwa Chauth.

Sargi has many items including food, the symbols of marriage like sindoor, jewellery, Kangan, bindi, clothes, and other gifts.

As mentioned before, there are an elaborate set of rituals in Karwa Chauth. Let’s dive right into those:

1. The first thing to do in the morning after waking up is to take a shower and wear fresh or new clothes.

2. In the puja room, a ritual called the Karwa Dharna has to be followed, where the woman has to make an image of Karwa Mata with ground rice.

3. In the evening, the idols of Maa Parvati having Lord Ganesha in her lap, along with Lord Shiva by her side have to be placed on a pedestal.

4. The women celebrating the Vrat can all sit together and an elderly woman can chant the story of Karwa Chauth. This is followed by the ritual where Maa Parvati is offered with makeup and sindoor.

5. During the moonrise, the women have to do right, when they offer water to the moon.

6. Finally, the fast can be broken and the women can eat. After breaking the fats, the blessings of the elders have to be taken.

So, this wraps up the rituals of Karwa Chauth. Hope this article was helpful and you got to know everything that was needed. Stay tuned for more such content.